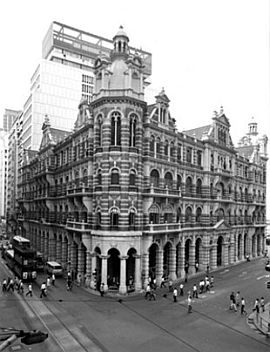 Located at the junction of Pedder Street and Des Voeux Road on the Hong Kong Island where World-Wide House is now situated, the old General Post Office (GPO) building was completed in 1911 and demolished in 1976. Throughout the years, it had been the headquarters of the Hong Kong Post Office, serving the public and maintaining close communication with postal administrations around the world for 65 years. Despite the lapse of nearly forty years since its demolition, the old GPO building remains in living memory of the people of Hong Kong.

Evolution of the Old GPO Building

Hong Kong's first post office was established in 1841 abutting the present St. John's Cathedral, and was later relocated in 1846 to the then Registrar General Office building at the corner of Queen's Road and Pedder Street. In the late 19th century, the post office was in urgent need for expansion. The government thus proposed to accommodate the post office and some other government offices under the same roof to facilitate daily government service. The junction of Pedder Street and Des Voeux Road near Blake Pier was surrounded with major road networks. This location not only provided convenient access for the public but also facilitated postal development. The decision to build a new GPO building there was finalised in 1902 and the new building was officially opened on 19 June 1911.

During the Japanese occupation of Hong Kong, postal services continued at the GPO building. After the liberation, with the continuous increase in demand for postal services, the office space became insufficient for postal operation despite the gradual removal of other government offices from the building.

Discussion concerning the construction of a new GPO in the Central Reclamation Area commenced in 1960, and by July 1969 the location for the present GPO was finalised. The new GPO building came into official use on 11 August 1976 and the old one was demolished three months afterwards for the construction of Mass Transit Railway.

What remains today are a few structures and decorative features. Now to be found at Kadoorie Farm and Botanic Garden are the four stone pillars from the old GPO building, and on the wall of the lobby on the first floor at the current GPO is a hardwood arch once mounted on the wall at the old GPO lobby. 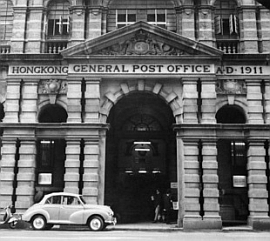 The old GPO building was designed during the Victorian period. It was considered as a very important public building by the 12th Hong Kong Governor, Sir Henry Blake, such that it was to be built with first class materials. Granite, which was an expensive building material during that time, was subsequently selected by the architects to be used for the principal elevations, while other walls were built of Canton red bricks faced with Amoy bricks externally. The adoption of constructional polychromy – the articulation on the elevations with the contrasting natural colour of brick and granite in the form of bands was popular during the High Victorian Gothic period.

The old GPO building was built in English Renaissance style. Such style was commonly found in large, grand buildings in England usually with rich decoration to express a sense of splendour. It features the symmetry of façades, the heavily rusticated pillars (pillars with blocks at intervals along the shaft) and arches with exaggerated voussoirs (the wedge-shaped units forming an arch) on the ground floor, the diminishing round-arched arcades at the verandahs, corner towers and the use of numerous gables on the roof.

The old GPO building was four storeys high with a basement. The basement was half sunken which allowed windows to be installed at street level for ventilation. The ground floor was elevated from the street level where the Postal Hall was located. On the first floor level, a large central courtyard was located, where some glazed roofs were designed for providing natural lighting into the interior below. Various offices were planned on the upper floors surrounding this courtyard on the three sides abutting the main streets. Lavatories and coolie quarters were arranged on the fourth side abutting on a private lane. The main public entrance at Pedder Street gave access to the Postal Hall, above which was a pediment decorated with a crowned cartouche (ornamental panel in the form of an oval with a slightly convex surface) inscribed with ‘G•P’, denoting ‘General Post Office’. Below the pediment, the characters ‘HONGKONG GENERAL POST OFFICE A•D• 1911’ were inscribed. 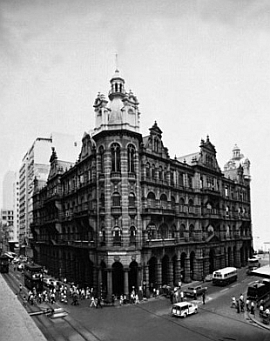 The Old GPO Building and the Hong Kong Community

The old GPO building witnessed the rapid development and advancement of Hong Kong and was once one of the most attractive landmarks along the waterfront of the Hong Kong Island. Despite the fact that the government had already identified a new site for relocation of the GPO as early as in 1969, the use of the original site remained unresolved until 1974 when the Mass Transit Railway (MTR) Corporation purchased the land. The old building was demolished in 1976 and a new commercial building was constructed on the vacated land, with the underground space used for construction of the Central Station of the MTR.

Ever since its opening in 1976, today’s General Post Office at Connaught Place, Central is committed to fulfilling its purpose of “Linking People, Delivering Business” through upholding the mission of the old GPO building – serving the community of Hong Kong and maintaining close ties between Hong Kong and the world.