To conserve pieces of Hong Kong's postal heritage, Hongkong Post recently completed the restoration of nine vintage posting boxes in mid-October. These historic postboxes are either the oldest or the most unique among those that remain in the territory. Eight of them were made during the reign of George V (1910-1936) and George VI (1936-1952), while the later one (also the only remaining oval posting box still servicing Hong Kong) was built during the reign of Elizabeth II. All nine posting boxes have served the people of Hong Kong for decades and are important antique items that have witnessed the fascinating changes in Hong Kong throughout the years. Hongkong Post is proud to have restored these antique posting boxes to their former glory so that they can continue to serve the people of Hong Kong for decades to come.

To raise public awareness of treasuring and preserving these antique posting boxes, especially among younger generations, a photo competition will be held from today to November 27. Participants are invited to take photos featuring any of these nine posting boxes during this period and submit them to Photo_Competition@hkpo.gov.hk before November 27. Each participant may submit a maximum of three photos. The winning photographers of the best 10 photos will each be awarded a Postmark Watch valued at $488, and their photos will be printed as posters to be shared with the public at post offices throughout Hong Kong for two months from December 2013 to January 2014.

The best 10 photos will also be shared with the public on the Facebook promotion page for the programme from December 9 until January 8 next year. The participant whose photo receives the most "Likes" during the period will win an additional prize of a Canon S100 camera.

To commemorate this special event, Hongkong Post will also launch a new PostShop souvenir, the Vintage Posting Box Set (Limited Collection), on December 25 for those who want to take home the message of conservation and a piece of Hong Kong's history. The Vintage Posting Box Set features replicas of all nine vintage posting boxes, beautifully packaged in a display case enclosed with a product certificate that has a unique serial number. The number of sets for sale is limited to just 400. At only $1,088, the limited edition Vintage Posting Box Set makes an ideal and unique gift. Advanced orders between now and December 24 can be made at www.shopthrupost.hk or at any PostShop outlet. Early birds will be entitled to a free gift (a Year of the Snake or Year of the Dragon canvas bag, each valued at $168) while stocks last. Individual vintage posting box figurines in stand-alone display cases will also be available for sale at $168 each from December 25 onwards. 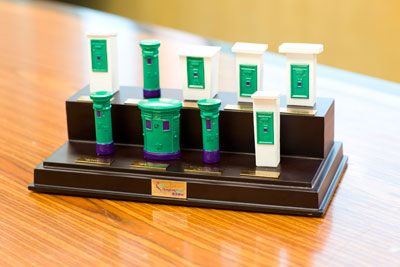 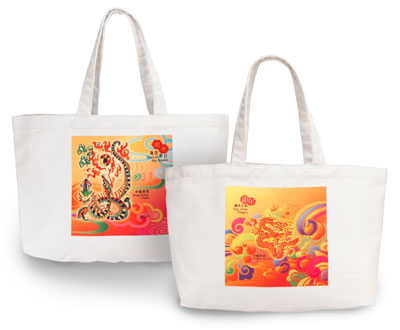 A free gift is being offered for each advance order for the Vintage Posting Box Set while stocks last.