Hongkong Post today (January 8) announced that a set of special stamps on the "Heartwarming" theme will be released for sale with associated philatelic products on January 23 (Thursday).

Building on the great success of previous issues on the themes of "Love and Care" and "Celebrations" in 2003, 2006, 2007 and 2009, Hongkong Post is releasing the fifth issue in the Heartwarming series. The new issue features new designs for the two existing themes of "Love and Care" and "Celebrations" and the new theme of "Birthday/Newborn". Unlike past designs in bright colour contrast, this issue offers a choice of stamps in soft pastels creating a feeling of warmth and tenderness. This issue consists of six specially designed stamps ideal for celebrating anniversaries, festive occasions, achievements, birthdays and the arrival of newborns. Printed with a hot foil stamping effect, they convey a joyful and festive mood.

Customised services for adding photos and messages to the new Heartwarming stamps are available so that customers can send personal greetings. Orders will be accepted from January 17 via www.hongkongpoststamps.hk and the Philatelic Bureau. 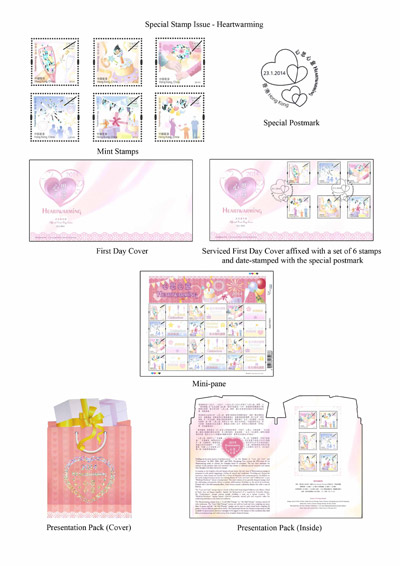