Hongkong Post today (January 29) announced that a set of special stamps with the theme "Chinese Dinosaurs" will be released for sale with associated philatelic products on February 20 (Thursday).

Dinosaurs were primeval vertebrates which appeared on earth as early as 220 million years ago and became extinct about 66 million years ago. There are diverse views on the cause of their extinction, and this remains an unsolved mystery of palaeontology. China has over 170 recorded dinosaur species. To enhance public understanding of dinosaurs in China, Hongkong Post is issuing a set of six special stamps under the title "Chinese Dinosaurs" and featuring six unique Chinese dinosaur species. This set of six "Chinese Dinosaurs" special stamps is printed with a luminous effect which allows the unique features of the Chinese dinosaurs to glow in the dark.

A set of postage prepaid picture cards with 3D effect, featuring the dinosaurs depicted on the special stamps, will also be released for sale at all philatelic offices from February 20. 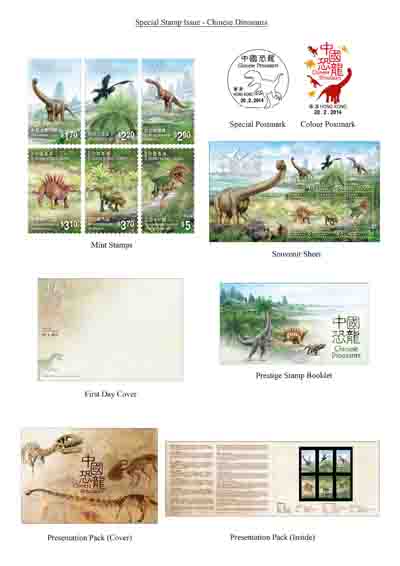