Hongkong Post today (November 19) announced that the "World Heritage in China Series No. 3: China Danxia" stamp sheetlet will be released for sale with associated philatelic products on December 4 (Thursday).

China Danxia was inscribed on the World Heritage List by the World Heritage Committee under the United Nations Educational, Scientific and Cultural Organization in 2010. Danxia landforms are characterised by spectacular red cliffs and a range of erosional landforms, including dramatic natural pillars, towers, ravines, valleys and waterfalls. They are the result of endogenous forces (including tectonic uplift) and exogenous forces (including weathering and erosion) acting on continental red terrigenous sedimentary beds over the millennia. China Danxia comprises Taining in Fujian, Langshan in Hunan, Danxiashan in Guangdong, Longhushan in Jiangxi, Jianglangshan in Zhejiang and Chishui in Guizhou, each having distinctive geological features. The splendour of the Danxia landforms is beautifully presented on the stamp sheetlet for all to see.

Information about this special stamp issue and associated philatelic products is available from Hongkong Post's website at www.hongkongpost.hk and via the Hongkong Post Mobile App. 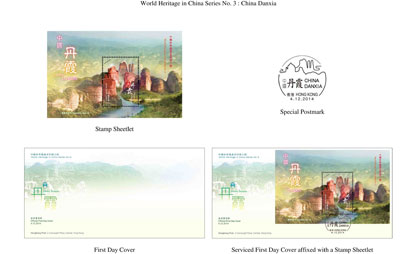 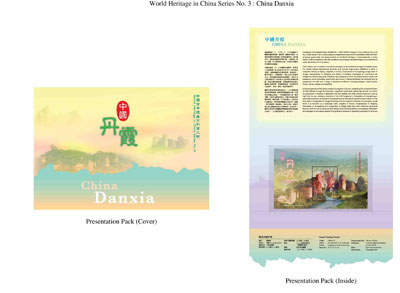