Hongkong Post today (August 18) announced that a stamp sheetlet on "The 70th Anniversary of the Victory of the Chinese People's War of Resistance Against Japanese Aggression" will be released for sale with associated philatelic products on September 2 (Wednesday).

The Central People's Government has designated September 3 as "The Victory Day of the Chinese People's War of Resistance Against Japanese Aggression" in remembrance of this historic event and to pay tribute to those who lost their lives in the conflict. This victory was a crucial step forward in the Chinese people's endeavour to revive our nation. It marked an important milestone in our nation's history, paving the way for the impressive social and economic development of today. The people of Hong Kong lived through this same period of history. This year marks the 70th anniversary of the victory and Hongkong Post is issuing a stamp sheetlet to commemorate this important event.

By contrasting scenes of the war of resistance against Japanese aggression with scenes of Hong Kong's thriving prosperity today, the stamp sheetlet highlights the message that stability and peace do not come easily and should be cherished.

Information about this commemorative stamp issue and associated philatelic products is available on Hongkong Post's website at www.hongkongpost.hk and via the Hongkong Post mobile app. 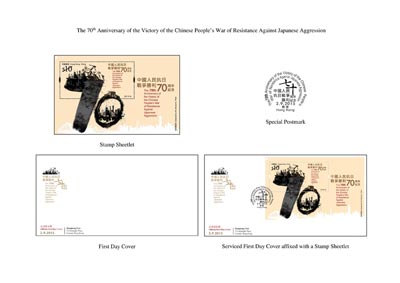 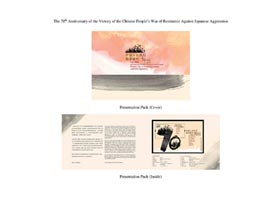