Hongkong Post today (September 24) announced that a set of special stamps with the theme of "World Post Day" will be released for sale with associated philatelic products on October 9 (Friday). Hongkong Post also announced that under the Love Post Day event on the same day, everyone in Hong Kong can send a personal letter to a local recipient free of charge (Details are attached).

Marking the anniversary of the establishment of the Universal Postal Union, World Post Day is celebrated worldwide every year on October 9 to highlight the importance of the postal service. In support of World Post Day, Hongkong Post designates October 9 as Love Post Day to spread the pleasure of letter-writing.

To take part in Love Post Day, members of the public can simply drop personal letters in the special collection boxes placed in all post offices (including mobile post offices) on October 9 and they will be delivered the following day. Hongkong Post is running this event for the 12th consecutive year.

This year, Hongkong Post is also releasing a set of four specially designed stamps to commemorate World Post Day. The stamp design features flying pigeons formed by crossed hands and the globe, symbolising the global reach of the postal service. The four stamps can be arranged to form two different patterns, one with the flying pigeons at the centre flying out to the four corners of the globe and the other with the pigeons flying in towards the centre, where the four quadrants of the globe come together. The background of each stamp shows "World Post Day" in different languages. 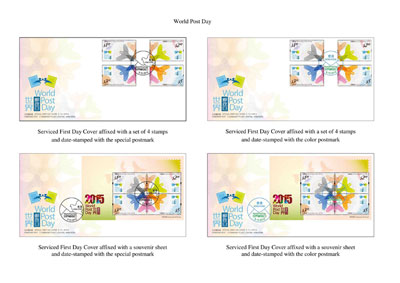