Hongkong Post announced today (November 23) that a set of special stamps on "Scientists in Ancient China" will be released with associated philatelic products for sale on December 8 (Tuesday).

Many great scientists emerged during the last two millennia in China. Their remarkable attainments underpinned ancient China's world-leading position in science. This set of stamps, entitled "Scientists in Ancient China", depicts four important figures in the realms of astronomy, mathematics and medicine, showcasing the extraordinary scientific achievements of our nation in ancient times.

Each of the four stamps in the set features a well-known scientist in ancient China and highlights one aspect of his contribution to science. They are:

(i) Zhang Heng and a seismoscope ($1.70 stamp) - Zhang Heng (AD 78-139), an astronomer in the Eastern Han Dynasty, invented the world's first seismoscope to deduce the time and direction of an earthquake;

(ii) Zu Chongzhi and the value of pi ($2.90 stamp) - Zu Chongzhi (AD 429-500) was a mathematician and astronomer in the Southern and Northern Dynasties, whose calculation of pi (accurate to the seventh decimal place) was a monumental accomplishment at the time;

(iii) Guo Shoujing and his Simplified Armilla ($3.70 stamp) - Guo Shoujing (AD 1231-1316), an astronomer, mathematician and hydraulics expert in the Yuan Dynasty, simplified the traditional armillary sphere and created the Simplified Armilla to enhance observational accuracy in measuring the equatorial co-ordinates of celestial bodies; and

(iv) Li Shizhen and his Compendium of Materia Medica ($5 stamp) - Li Shizhen (AD 1518-1593) was a medical expert and pharmacologist in the Ming Dynasty. He spent about 30 years compiling books on medicine, culminating in the completion of the Compendium of Materia Medica in 1578. The book was regarded as the most comprehensive pharmacological taxonomy work at that time.

To add interest for philatelists, the outline drawing of each scientist is embedded with his name in micro-text.

Official First Day Covers will be on sale at $1.20 each at all post offices from November 24. Hongkong Post is also issuing Serviced First Day Covers affixed with a set of stamps or a souvenir sheet, and date-stamped with a colour postmark for sale at all philatelic offices.

Information about this special stamp issue and the associated philatelic products is available on Hongkong Post's website at www.hongkongpost.hk and via the Hongkong Post Mobile App. 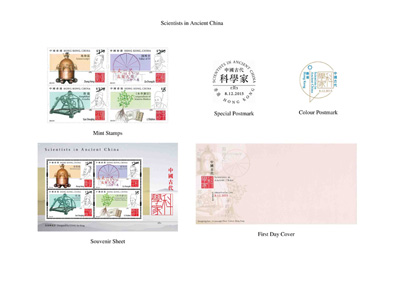 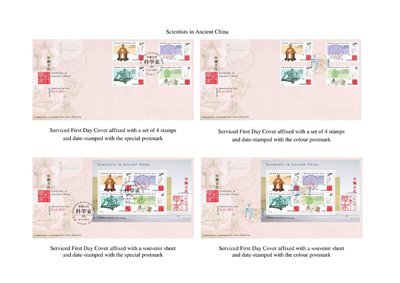 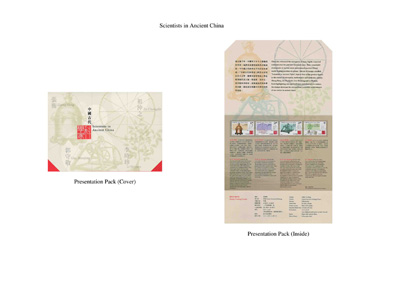