Hongkong Post today (October 6) announced that a set of four postage prepaid postcards on the theme of "2016 FIA Formula E Hong Kong ePrix" will be released for sale today to mark the debut of this international event in Hong Kong for the first time.

The 2016 FIA Formula E Hong Kong ePrix will be staged on October 8 and 9 at the Central Harbourfront. Ten top-notch motor racing teams will compete for the championship of electric motor racing with low emission against the magnificent backdrop of the Victoria Harbour.

Three of the postcards depict a Formula E racing car set in Hong Kong's world-famous night scene, while the fourth postcard shows the Hong Kong ePrix circuit. These postcards, carry air mail postage and can be sent to all destinations.

The new set of postage prepaid postcards, at $24 each, will be sold at all philatelic offices from today.

Information about this set of postage prepaid postcards is available on Hongkong Post’s website at www.hongkongpost.hk and the Hongkong Post mobile app. 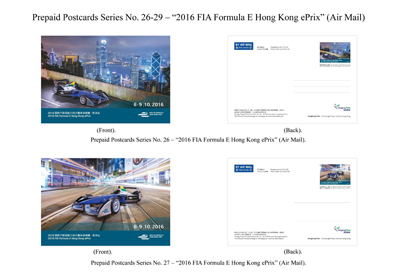 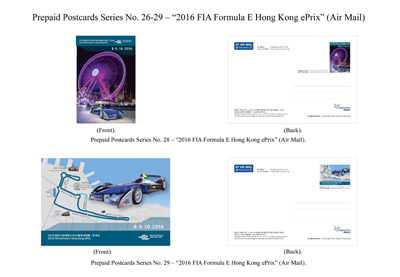