Hongkong Post announced today (February 1) the release of a stamp sheetlet entitled "World Heritage in China Series No. 6: Kaiping Diaolou and Villages", together with associated philatelic products, which will go on sale on February 16 (Thursday).

Kaiping Diaolou and Villages, located in Kaiping, Guangdong Province, was inscribed on the World Heritage List in 2007. The origin of the diaolou dates back to the Ming dynasty, when Kaiping residents built defensive towers boasting thick, reinforced walls in their villages to protect themselves against rampant bandit raids, a society without law and order, and frequent floods. Today, there are 1 833 surviving examples of the diaolou in 15 towns across Kaiping. The diaolou towers blend graciously with the natural landscape and traditional village dwellings of the Kaiping countryside to form a truly unique picture.

The stamp sheetlet depicts the cluster of diaolou towers on the farmlands of Zili village in the town of Tangkou in Kaiping. Members of the cluster include Yangxian Villa, Yunhuan Lou, Ju'an Lou and Anlu. Diaolou towers in other villages in Kaiping are also integrated into the design with the aid of computer graphics. The right side of the stamp sheetlet shows a close-up of a diaolou tower rooftop, which gives the illusion that one is actually admiring the breathtaking scenery of the Kaiping villages from the rooftop.

Hongkong Post has been issuing stamp sheetlets in the World Heritage in China Series since 2012. This is the sixth sheetlet in the series.

Information about this special stamp issue and associated philatelic products is available on Hongkong Post's website at www.hongkongpost.hk and the Hongkong Post mobile app. 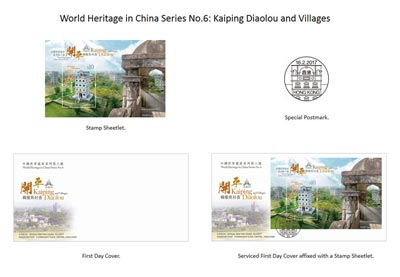 Presentation Pack with a theme of "World Heritage in China Series No.6: Kaiping Diaolou and Villages".