Hongkong Post announced today (May 29) the issue of a set of commemorative stamps on the theme of "100 Years of Numbered Typhoon Signals", together with associated philatelic products, on June 13 (Tuesday).

Typhoon signals, originally devised for the marine community, have been widely adopted for general use. In 1917, numbered typhoon signals indicating the wind direction and wind strength associated with tropical cyclones first came into use in Hong Kong for the purpose of warning the public. At first, there were only Signal Nos. 1 to 7. After several enhancements, the signals were replaced with Signal Nos. 1 to 10 in 1931. Signal Nos. 2, 3 and 4 were used intermittently afterwards before becoming obsolete in the late 1930s. In 1956, Strong Wind Signal No. 3 was introduced. The whole numbered signal system was modified again in 1973 and this system has been used since then. The year 2017 marks the 100th anniversary of the introduction of numbered typhoon signals in Hong Kong. Hongkong Post is issuing a set of five stamps and a stamp sheetlet to commemorate the occasion.

Information about this commemorative stamp issue and associated philatelic products is available on Hongkong Post's website at www.hongkongpost.hk and the Hongkong Post mobile app. 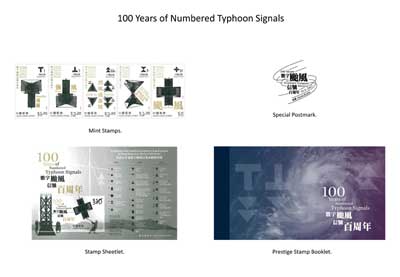 Serviced First Day Covers with a theme of "100 Years of Numbered Typhoon Signals". 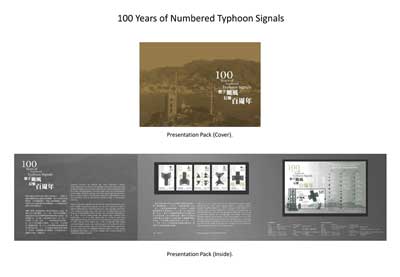 Presentation Pack with a theme of "100 Years of Numbered Typhoon Signals".