Hongkong Post today (November 7) announced that a set of stamps on the theme of "Hong Kong Insects II", together with associated philatelic products, will be released for sale from November 22.

Characterised by metropolitan hustle and bustle, Hong Kong is also blessed with a countryside rich in ecological resources. This favourable habitat is home to a great variety of insects, many of which are rare species. As a sequel to the first series, entitled "Hong Kong Insects", launched on July 16, 2000, Hongkong Post is releasing special stamps called "Hong Kong Insects II" to showcase six precious species found in Hong Kong, with a view to enhancing the public's understanding of the ecology of local insects and the importance of nature conservation. 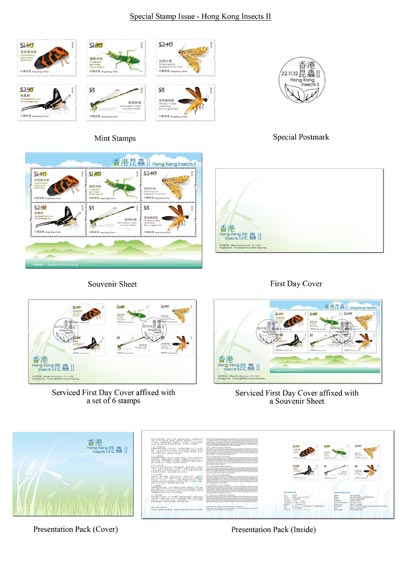