Hongkong Post today (November 23) announced that a set of special stamps on "The 150th Anniversary of Stamp Issuance in Hong Kong" will be released for sale with associated philatelic products on December 8 (Saturday).

As early as 1841, a postal bureau was established in Hong Kong to handle mail items for the British Army and postal matters for the public. In its early days, the Post Office (now also known as Hongkong Post) did not issue stamps but focused on postal service, and mail items were postmarked as a proof of postage payment. It was not until 1862 that Hong Kong released its first stamp issue.

It has been one and a half centuries since the release of our first set of stamps on December 8, 1862, when Hong Kong was under British rule. The stamps came in a set of seven and featured Queen Victoria in profile. To mark the 150th anniversary of stamp issuance in Hong Kong this year, Hongkong Post will issue a set of six commemorative stamps and a stamp sheetlet adopting a "stamp-on-stamp" design. Modelled on the first set of stamps issued in Hong Kong, each stamp/stamp sheetlet features one of our first seven stamps alongside a writing instrument from an era in history or an electronic data-carrier device widely used nowadays. The contrast between the past and the present highlights the progression of time and the unfading charm of stamps.

To mark the 150th anniversary of stamp issuance in Hong Kong, Hongkong Post will organise a stamp exhibition - "The 150th Anniversary of Stamp Issuance in Hong Kong Stamp Exhibition" - to showcase the evolution of Hong Kong stamps over the past 150 years. In connection with the exhibition, two designs of the Heartwarming Stamps Mini-pane will be released for sale at the General Post Office, Tsim Sha Tsui Post Office, Tsuen Wan Post Office and Sha Tin Central Post Office from December 8. Shaped like our mobile post office and posting box, each mini-pane contains 12 stamps for local mail postage and eight stamps for air mail postage to suit different posting needs. The stamp tabs feature the past and present mobile post offices and posting boxes, the third General Post Office located at the junction of Pedder Street and Connaught Road Central in 1911, the old datestamps used before 1997 and old stamp vending machines.

Official First Day Covers of "The 150th Anniversary of Stamp Issuance in Hong Kong" special stamps will be put on sale at $1 each at all post offices from November 24. A prestige version of the Official First Day Cover will also be available at $8 each at all philatelic offices. These items will be displayed at the General Post Office, Tsim Sha Tsui Post Office, Tsuen Wan Post Office and Sha Tin Central Post Office from the same day. Advance orders for servicing self-provided covers will be accepted at all philatelic offices from November 24 to 30, 2012.

All post offices (except mobile post offices which do not operate on Saturday) will maintain their normal Saturday operating hours on December 8. 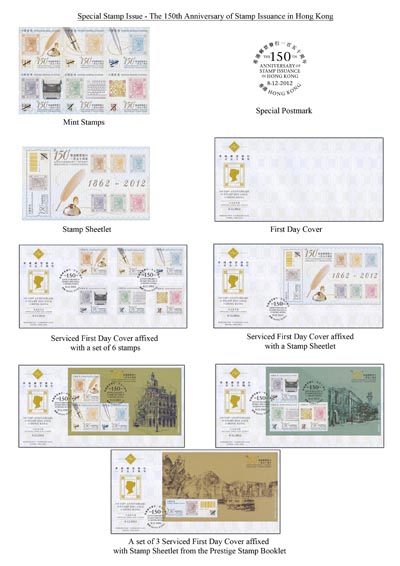 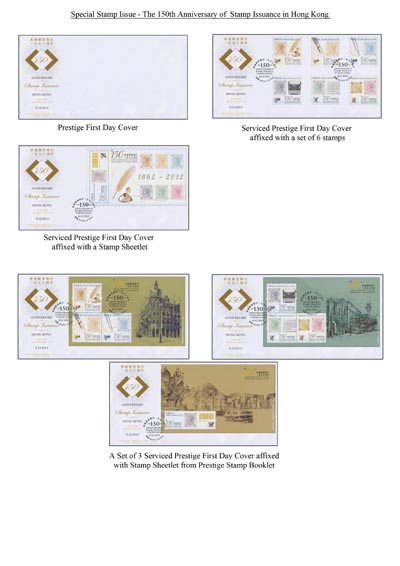 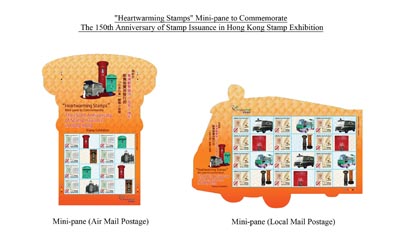