Hongkong Post announced today (December 11) that the 2017 Prestige Annual Stamp Album and the 2017 Annual Stamp Pack will be on sale at all 38 philatelic offices and the PostShop at the General Post Office, as well as through ShopThruPost (www.shopthrupost.hk), from December 19 (Tuesday).

A wide variety of stamps is issued by Hongkong Post every year, each with a unique design and featuring interesting themes, to capture the attention of both stamp collectors and the general public. Though small in size, stamps are miniature wonders that are rich in meaning. The stamp issues released by Hongkong Post in 2017 were diverse in theme, commemorating some of the key events of the year and introducing a range of interesting subjects including historic buildings and heritage, art and culture, natural science and the uniqueness of Hong Kong.

The 2017 Prestige Annual Stamp Album, priced at $568, contains a comprehensive collection of special and commemorative stamps, souvenir sheets and stamp sheetlets issued by Hongkong Post in 2017. The 2017 Annual Stamp Pack, priced at $208, contains all special and commemorative stamps issued by Hongkong Post during the year. With a parcel as the design concept, the 2017 Prestige Annual Stamp Album and 2017 Annual Stamp Pack aim to provide readers with the same excitement as unwrapping a long-awaited package when they open these publications. Browsing through this collection of stamps, readers can look back on the major events of the year, recall the fun and laughter of the festive occasions, and expand horizons and knowledge. 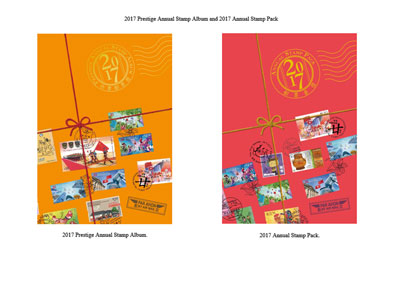