Hongkong Post today (November 25) announced that a new stamp issue on the theme of "Congratulations on the Outstanding Achievements of Hong Kong Paralympians in the London 2012 Paralympic Games" in a Heartwarming Stamps mini-pane, together with associated philatelic products, will be released for sale from December 13.

Hongkong Post is pleased to issue a mini-pane and a souvenir cover to commemorate the accomplishments of the Hong Kong delegation at the London 2012 Paralympic Games. The mini-pane features Hong Kong athletes in action during the Games and touching moments at the medal presentation ceremonies, while the souvenir cover depicts the entrance of the Hong Kong delegation during the opening ceremony of the London 2012 Paralympic Games. 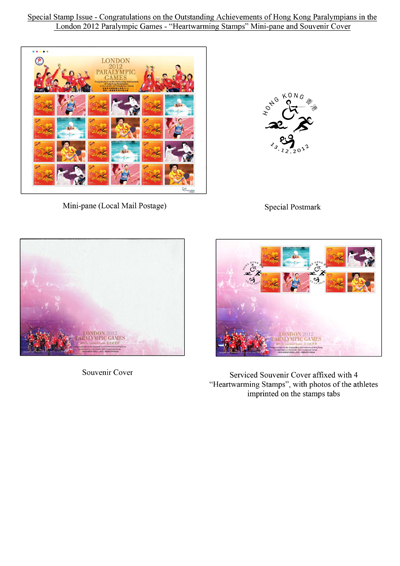