Hongkong Post today (March 9) announced that a stamp sheetlet and mini-pane entitled "The 150th Anniversary of Queen's College" will be released for sale together with associated philatelic products on March 27.

Founded in 1862, Queen's College was the first government secondary school set up in Hong Kong. It also pioneered teacher education locally. Over the years, Queen's College has produced many notable alumni who excel in various fields and contribute to the development of Hong Kong.

Set in a nostalgic sepia tone, the stamp sheetlet depicts the old school building on Hollywood Road in the foreground against the present Causeway Road campus in the background, highlighting the long history of Queen's College and its commitment to education over the past 150 years. On the right is a shield-shaped stamp, modelled on the school badge of Queen's College and the first of its kind launched by Hongkong Post. A mini-pane containing four $10 stamps printed in different methods using silk-screen glitter ink, embossing, lacquer and 22K gold plating with embossing is also available.

Official First Day Covers will be on sale at $1 each at all post offices from March 13 while the stamp sheetlet and the mini-pane and associated philatelic products will be displayed at the General Post Office, Tsim Sha Tsui Post Office, Tsuen Wan Post Office and Sha Tin Central Post Office from the same day. Advance orders for servicing self-provided covers will be accepted at all philatelic offices from March 13 to 19. Further information can be obtained from the website of Hongkong Post at www.hongkongpost.com. 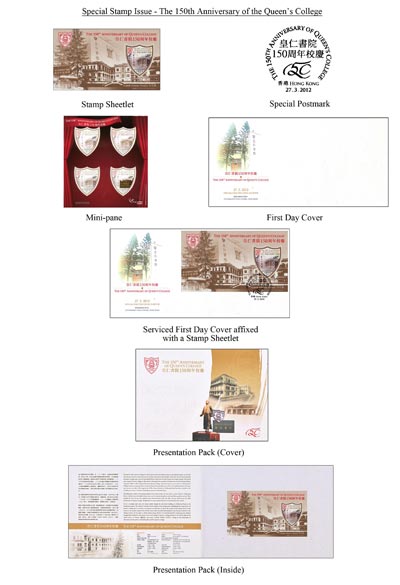 Special stamp issue - "The 150th Anniversary of Queen's College".
Back