Hongkong Post announced today (July 26) the release of a stamp sheetlet, "World Heritage in China Series No. 7: Temple of Heaven", together with associated philatelic products, on August 10 (Friday).

Hongkong Post has been issuing stamp sheetlets in its World Heritage in China Series since 2012 to showcase the charm and beauty of the precious natural and cultural locations in our country that have been inscribed on the World Heritage List by the World Heritage Committee of the United Nations Educational, Scientific and Cultural Organization. To date, China has more than 50 world heritage sites.

The Temple of Heaven in Beijing, officially listed as a world heritage site in 1998, is featured in Stamp Sheetlet No. 7 of the World Heritage in China Series. Covering an area of 273 hectares, the Temple of Heaven was originally the place where emperors of the Ming and Qing dynasties worshipped and offered sacrifices to heaven. First built in 1420, the Temple of Heaven underwent continued expansion, and was finally completed during the Qianlong period in the Qing dynasty.

The stamp sheetlet depicts the Hall of Prayer for Good Harvests, the focal point of the Temple of Heaven. Measuring 32 metres in diameter and 38 metres in height, the Hall is the largest surviving ancient round wooden structure in Beijing. A close-up of its caisson ceiling adorned with dragons and phoenixes is shown in the top right-hand corner of the stamp sheetlet, highlighting its exquisite craftsmanship and regal splendour. Printed on the bottom right is the Imperial Vault of Heaven, the place where the memorial tablets used in the rituals at the Circular Mound Altar were kept. The conical roof of the Vault is covered with blue glazed tiles and crowned with a gilded sphere, lending a touch of dazzling glamour. 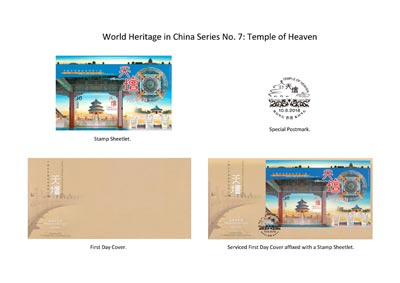 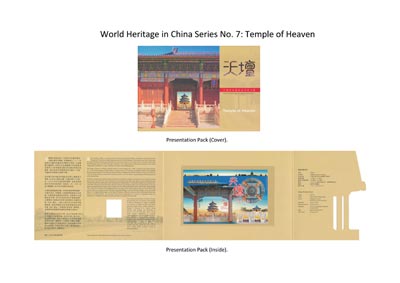 Presentation Pack with a theme of "World Heritage in China Series No. 7: Temple of Heaven".