Hongkong Post announced today (September 20) the release of a set of special stamps under the theme "Cantonese Opera Repertory", together with associated philatelic products, on October 9 (Tuesday).

Cantonese opera is a representative traditional performing art form in Hong Kong that was officially inscribed onto the United Nations Educational, Scientific and Cultural Organization's Representative List of Intangible Cultural Heritage of Humanity in 2009. It has become an important icon of our local culture - one which is worth savouring and passing on. In Cantonese opera the performers present various stories with the "four basic skills" of singing, acting, narrating and martial arts, complemented by distinctive music, costumes, props and stage settings.

The set of special stamps on "Cantonese Opera Repertory", featuring six immensely popular Cantonese opera plays and their classic scenes, includes The Story of Princess Changping ($2), The Moon Pavilion ($2.60), Lord Guan Gong Releasing Lady Diao Chan ($3.40), The Princess in Distress ($3.70), Butterfly Lovers ($4.90) and Lady Zhaojun Departing for the Frontier ($5). The stamps show an important scene from each opera with vivid and distinctive portrayals of the characters in the plays.

Most of the plots are based on folk tales, Chinese history and myths. As the scripts of the plays are often created by talented writers, the lyrics are regarded as literary classics. Apart from being a popular form of entertainment, Cantonese opera is also a precious cultural tradition that we should preserve. For those looking to learn more, the stories behind these six great works are outlined in some detail in an attractive bilingual Prestige Stamp Booklet, accompanied by colourful photos of the key scenes from the performances. 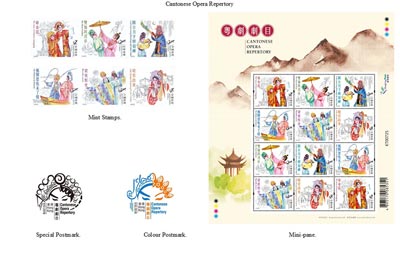 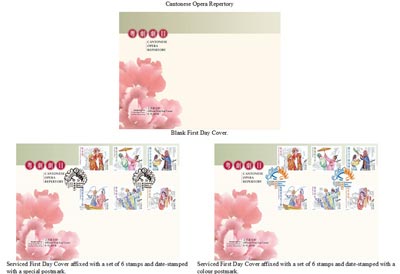 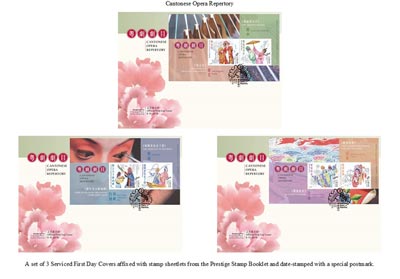 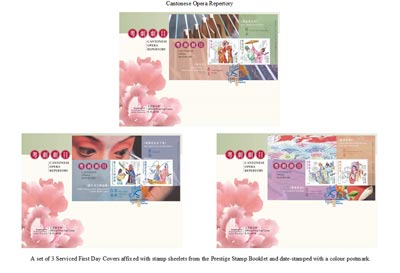 Presentation Pack with a theme of “Cantonese Opera Repertory”.

Prestige Stamp Booklet with a theme of “Cantonese Opera Repertory”.