Hongkong Post announced today (July 25) that a stamp sheetlet on the theme "World Heritage in China Series No. 8: Zuojiang Huashan Rock Art Cultural Landscape" and associated philatelic products will be released for sale on August 13 (Tuesday).

Since 2012, Hongkong Post has issued stamp sheetlets Nos. 1 to 7 under the World Heritage in China Series. The current issue is the eighth in the series. Zuojiang Huashan Rock Art Cultural Landscape is located in Chongzuo City in the Guangxi Zhuang Autonomous Region and was included in the World Heritage List in 2016 by the World Heritage Committee of the United Nations Educational, Scientific and Cultural Organization (UNESCO). "Huashan" refers to the cliffs with paintings along the Zuojiang River and its tributary the Mingjiang River that stretch over 100 kilometres. It is the most extensive site of a rock art cluster in Southern China as well as Southeast Asia. Created by the ancient Luoyue people more than 2 000 years ago, the rock art comprises squatting figures and motifs of ritual ceremonies illustrating the mystique of primitive religious beliefs as well as the social and spiritual life of the time. The stamp sheetlet features Chongzuo City's Ningming Huashan rock art, which is the largest and most inclusive part of the entire Zuojiang Huashan rock art cluster. The stamp affixed in the stamp sheetlet showcases the ritual dance in this piece of rock art. 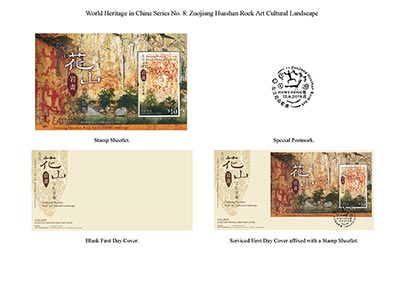 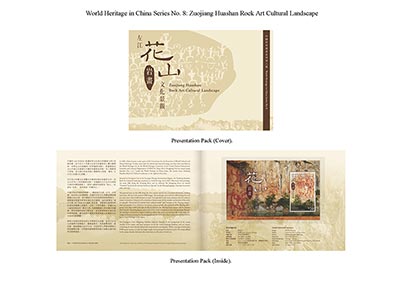