Hongkong Post today (February 14) announced that a set of special stamps entitled "The 150th Anniversary of the International Committee of the Red Cross" will be released for sale with associated philatelic products on February 28 (Thursday).

Established in 1863, the International Committee of the Red Cross (ICRC) is an impartial, neutral and independent organisation with an exclusive humanitarian mission to protect the lives and dignity of victims of armed conflicts and other situations of violence and to provide them with assistance. The ICRC also endeavours to prevent suffering by promoting humanitarian law and universal humanitarian principles. To mark the 150th anniversary of the ICRC, Hongkong Post is issuing a set of commemorative stamps featuring the four pillars of ICRC action, namely protection, assistance, prevention and co-operation, to commend the ICRC for its humanitarian contributions. 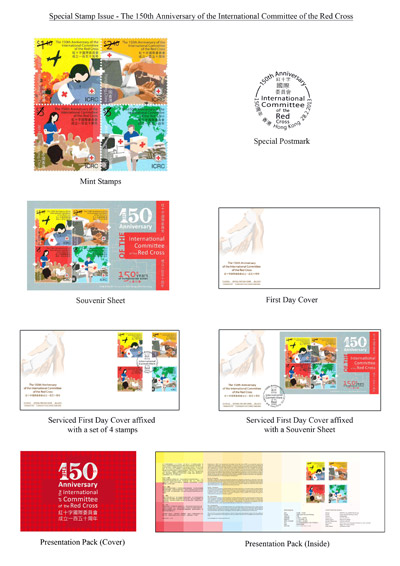 Special Stamp Issue - "The 150th Anniversary of the International Committee of the Red Cross".
Back