Hongkong Post will launch a special stamp issue and associated philatelic products with the theme "Bruce Lee's Legacy in the World of Martial Arts" on November 27 (Friday), the day of the 80th anniversary of Bruce Lee's birth, to pay tribute to the all-time superstar through his films and philosophy.

As one of the most popular icons in modern history, the legendary martial arts master Bruce Lee still inspires people worldwide more than 47 years after his passing. His great achievements transcend territories, times and disciplines. His charisma radiated from the silver screen, his prowess amazed the martial arts community, his profound legacy lives on in the hearts of many.

The special stamp issue comprises a set of six stamps and two stamp sheetlets, referring to Bruce Lee's four sensational movies - "The Big Boss", "Fist of Fury", "The Way of the Dragon" and "Game of Death" - as well as his philosophy and signature Jeet Kune Do. The $10 and $20 stamp sheetlets also portray Lee from various perspectives representing multiple aspects of who he was and how he lived his life.

The souvenir pack with this issue has a unique design. The outer box is modelled on the strongly nostalgic concept of a clapperboard. Packed inside are a brightly coloured stamp album, a set of six maximum cards and an attractive notebook. The cover of the album features gold embossing of the theme, further embellished with Lee's silhouette in matte finish as well as his autograph. Together with the gilt edging, the album imparts a sense of subdued luxury. It contains a set of six stamps in se-tenant style and $10 and $20 stamp sheetlets, and includes Lee's philosophical quotes. The English font type is derived from Lee's own script, making it a precious collectible. The notebook in retro style is also printed with Lee's autograph and his beliefs in Jeet Kune Do. A special flip-out page in the centre presents many photographs of Lee's life and his daily schedule, making it particularly appealing to his movie fans and followers.

The mini-pane issued in parallel will enable kung fu fans to enjoy wonderful scenes from a variety of Bruce Lee's movies. It is designed as an old-style movie ticket, which shows both local characteristics and Lee's iconic status in the movie industry. A special stamp is printed on the mini-pane as well as the Chinese character for dragon, which is derived from his autograph. Lee's date and year of birth are ingeniously marked on the ticket and seating numbers on the mini-pane, rendering the series exceptionally meaningful for collectors. 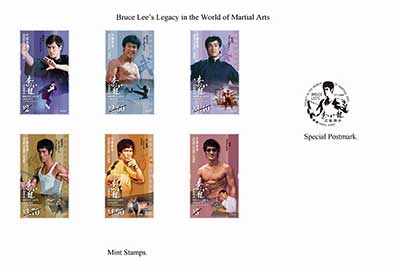 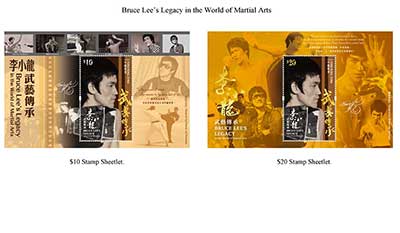 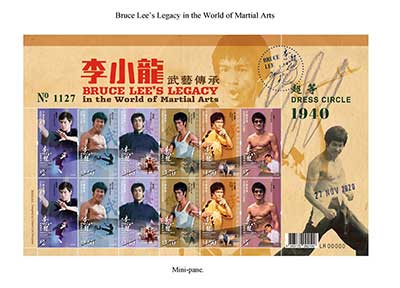 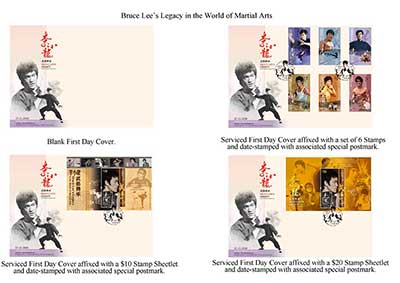 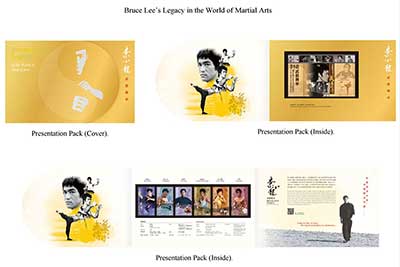 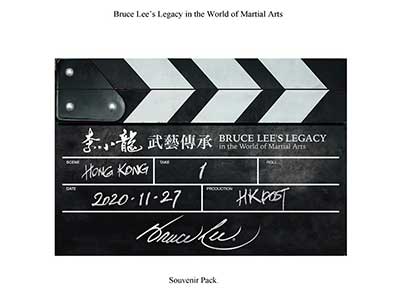 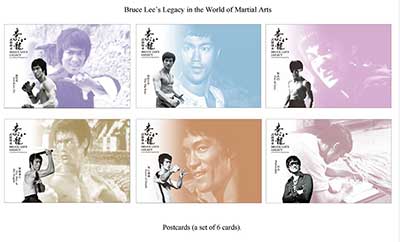 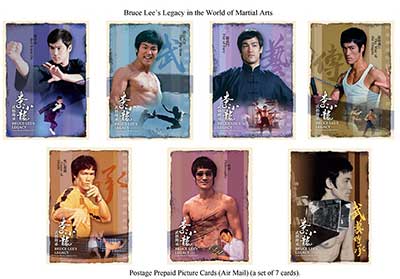