Hongkong Post will launch a special stamp issue and associated philatelic products with the theme "Classical Novels of Chinese Literature - Romance of the Three Kingdoms" on March 16 (Tuesday). To present the essence of the novel, this set of stamps has adopted the paintings created by the renowned artist Tung Pui-sun in its design, enabling one to revel in the appreciation of this epic novel's remarkable moments in the miniature wonders.

Ascribed to novelist Luo Guanzhong of the period from late Yuan to early Ming Dynasties, the Romance of the Three Kingdoms drew ideas from the dramatic era towards the end of the Eastern Han Dynasty, where warlords rose to power resulting in a tripartite division of the land. Its well-knit plot with thrilling twists and turns, enriched with domination schemes and strategies and enlivened by characters with distinct personalities succeeded in creating this epic historical novel in chapters. The set of six stamps and two stamp sheetlets features eight of the popular scenes in the design, namely The Oath of the Peach Garden, A Notion of Heroes over Warm Wine, Escorting Sisters-in-law over a Thousand Miles, Three Visits to the Thatched Cottage, Zhao Yun Saving the Young Lord, Empty Fort Stratagem, The Arrow through the Halberd and Borrowing Arrows with Straw Boats. To underscore the dynamic scenes on the two stamp sheetlets, the stamps of both are specially made in a triangular shape, making them precious collectibles.

A brand new product, collector pack, will also be launched this time. Exquisitely designed, the pack comes with treasured contents such as the original paintings created by Tung for the stamp design, which allows philatelists to take a closer look at every detail of the plot and characters of the novel. It includes a comprehensive range of stamp products: a set of six stamps, a $10 stamp sheetlet, a $20 stamp sheetlet, a serviced first day cover and two serviced collector covers. The designs of the two serviced collector covers differ from that of the official first day cover. One collector cover features the scene, A Notion of Heroes over Warm Wine, produced with bright and vivid colours making it a pleasure to behold, while the other that depicts the scene Escorting Sisters-in-law over a Thousand Miles seems to bring the steed to life. The two serviced collector covers are included exclusively in the collector pack and not for sale separately.

Another new product to be launched is the collector card. The card is affixed with a set of six self-adhesive stamps with an ingenious double-sided design for philatelists' ease of appreciation. The scene, Zhao Yun Saving the Young Lord, is used for the front, showing the heroic spirit of the characters through its intense composition; the back is printed with superbly rendered images of the entire stamp issue, covering every stamp at a single glance that allows everyone to revisit these six household stories from the Romance of the Three Kingdoms. It is surely an item to include in one's collection and gift list. 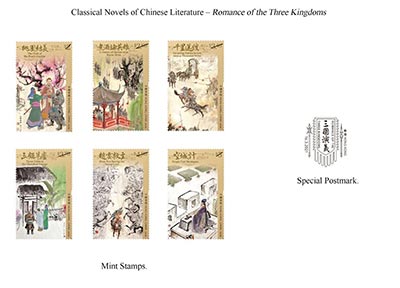 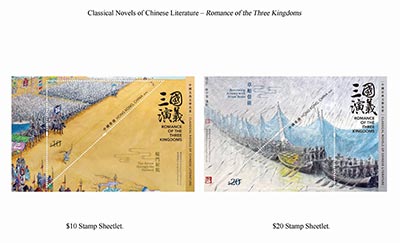 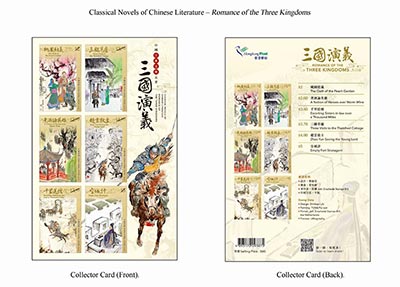 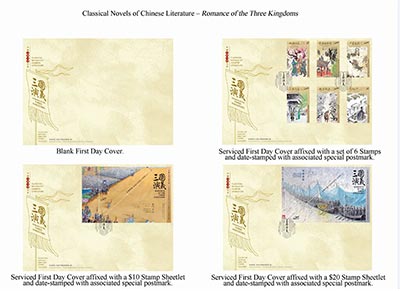 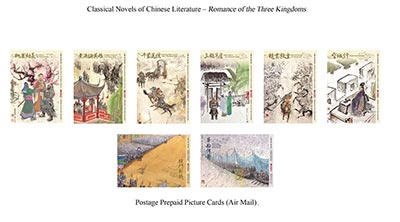 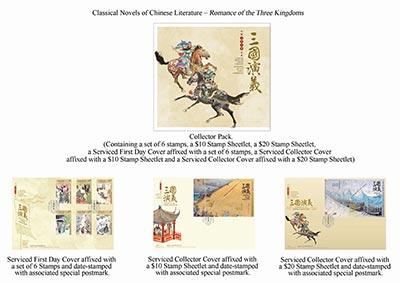