Hongkong Post announced today (June 28) the release of a commemorative stamp issue and associated philatelic products on the theme of "The 100th Anniversary of the Founding of the Communist Party of China" on July 1.

2021 marks the 100th anniversary of the Communist Party of China (CPC) since its founding in July 1921. Hongkong Post is issuing a set of four stamps and a stamp sheetlet on that theme in commemoration of this momentous occasion.

In addition to the stamps and stamp sheetlet, the presentation pack is also a must-have item. It comes with a set of four commemorative stamps and a stamp sheetlet. Its cover shows the silhouettes of various iconic buildings and famous attractions in Beijing or in Hong Kong, such as the Temple of Heaven in Beijing and the Hong Kong Convention and Exhibition Centre. With its exquisite printing and fine packaging, the presentation pack is a precious collectable not to be missed. The first day cover adopts a bright tone embellished with fireworks to create a joyful and festive ambience, which also symbolises Hong Kong's celebration of the 100th anniversary of the founding of the CPC.

Information about this commemorative stamp issue and associated philatelic products is available on the Hongkong Post Stamps website (stamps.hongkongpost.hk) or the ShopThruPost mobile app. 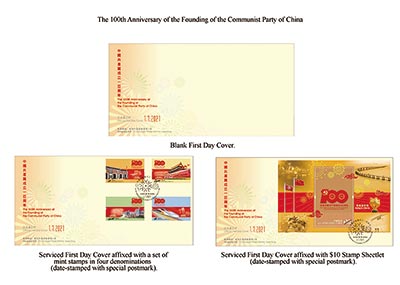 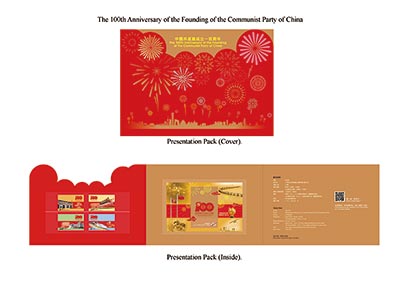