Hongkong Post to issue "Congratulations on the Outstanding Achievements of the Hong Kong, China Delegation at the Tokyo 2020 Olympic Games" special stamps

Hongkong Post announced today (September 9) the release of a stamp sheetlet and associated philatelic products with the theme of "Congratulations on the Outstanding Achievements of the Hong Kong, China Delegation at the Tokyo 2020 Olympic Games" on October 28 (Thursday). Advance orders are being accepted from today.

The Games of the XXXII Olympiad was held in Tokyo, Japan, from July 23 to August 8. Athletes of the Hong Kong team won six medals - a gold medal in Men's Foil Individual, silver medals in Women's 200m Freestyle and Women's 100m Freestyle, and bronze medals in Women's Team of table tennis, Women's Kata and Women's Sprint in track cycling - and achieved the best result ever. The community is proud of these achievements.

To celebrate the outstanding achievements of the Hong Kong, China Delegation, Hongkong Post will issue a commemorative stamp sheetlet containing a set of five newly designed stamps, showcasing the events of fencing, swimming, table tennis, karate and track cycling. All of the Olympic medallists will be featured in the commemorative stamp sheetlet, making it an exceptionally meaningful collectible.

Customers may place their orders for this stamp sheetlet and associated philatelic products through the Hongkong Post Stamps website (stamps.hongkongpost.hk) or the Facebook page (www.facebook.com/HKPStamps) now. Customers may also download and complete the printed form and return it to any post office (except mobile post offices) or by post to the Hongkong Post Philatelic Bureau, P.O. Box 11968, General Post Office, Hong Kong, or the Hongkong Post Philatelic Bureau, Freepost No. 15, Hong Kong (for locally posted mail only). Printed forms will also be available at post offices. The deadline for order placement is September 21 (Tuesday).

Information about the special stamps and associated philatelic products is available on the Hongkong Post Stamps website and in the "ShopThruPost" mobile app.

In the meantime, Hongkong Post would also like to extend its congratulations to the Hong Kong, China Delegation for completing the Tokyo 2020 Paralympic Games with flying colours, claiming two silver medals and three bronze medals in total. Hongkong Post is planning another stamp issue to commemorate their achievements. Information will be released at a later stage. 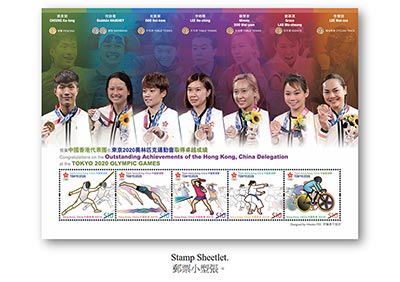