Hongkong Post today (May 27) announced that two stamp sheetlets on the theme of "Kai Tak Cruise Terminal" will be released for sale with associated philatelic products on June 11 (Tuesday).

Blessed with a strategic location, a natural deep-water harbour and a thriving tourism industry, Hong Kong is well positioned to become a cruise hub in the region. Situated on the site of the old Kai Tak Airport runway, the Kai Tak Cruise Terminal is a major tourism infrastructure project to develop Hong Kong into an Asian cruise centre and to further enhance our city's attraction as a tourist destination. Construction of the Kai Tak Cruise Terminal commenced in November 2009. The terminal building and the first berth will come into operation in June 2013. Hongkong Post is issuing two special stamp sheetlets to commemorate the inaugural berthing at the new facility.

The $10 stamp sheetlet is printed in lithography. The $20 stamp sheetlet is specially made on top of silver hot foil. The stamps on both stamp sheetlets feature a backdrop of the cityscape of East Kowloon. The cruise terminal, with its smooth lines and contemporary design, fully displays the beauty of modern architecture and the architectural diversity of our city. 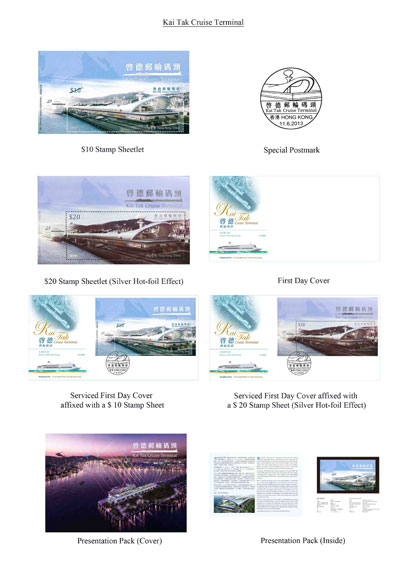