Hongkong Post today (August 7) announced that the "World Heritage in China Series No. 2: The Old Town of Lijiang" stamp sheetlet will be released for sale with associated philatelic products on August 22 (Thursday).

The Old Town of Lijiang, also known as Dayan Town, is located in Lijiang Naxi Autonomous County in Yunnan Province. Established in the late Song Dynasty and early Yuan Dynasty (late 13th century), Lijiang is a famous ancient town set in an idyllic landscape, embracing the picturesque scenery of both a mountain city and a waterside village. The historic town is an important cultural treasure trove for the study of Chinese architecture.

In this stamp sheetlet, the soaring Jade Dragon Snow Mountain is used as the backdrop. On the lower left of the stamp sheetlet is Mu's Mansion, with Wanjuan Pavilion featured on the stamp. The 100-Year-Old Bridge is portrayed on the right of the stamp sheetlet. Located near mountains and waterways, the Old Town of Lijiang blends well with the natural environment and its enchanting scenery. 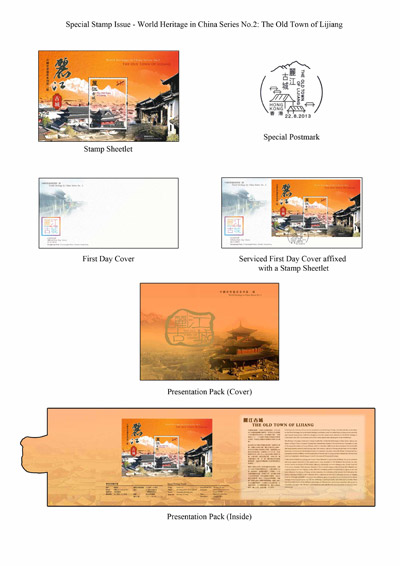 Special stamp issue - "World Heritage in China Series No. 2: The Old Town of Lijiang".
Back